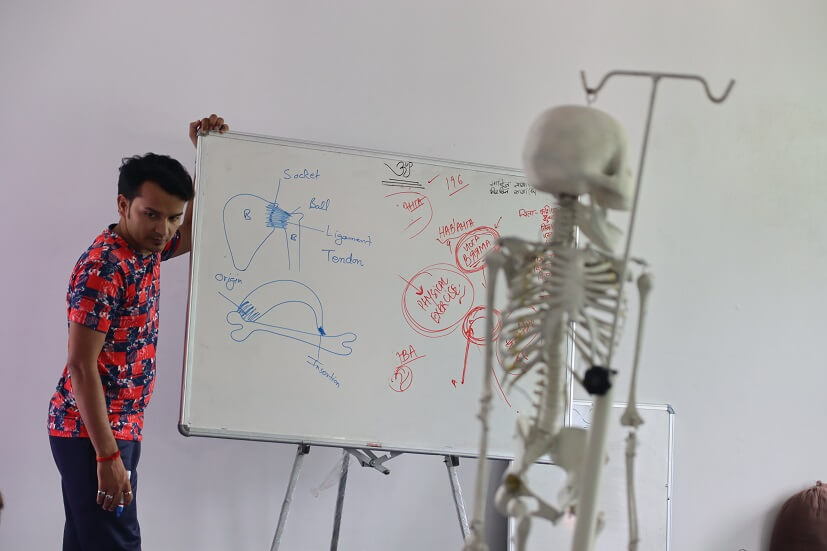 History and purpose of Yoga Yoga comes from the Sanskrit word “Yuj” which means to unite. Unity of body, mind and breath guides us towards healing. It is when these aspects are not aligned that there is disharmony and dis-ease within the human organism; to prevent this, Yoga offers us practices based on physical movement, breathing, ethical conduct, control of the mind and the intellect. Individualized in its approach, Yoga can bring about the alignment of the human organism which ideally results in health and harmony. Yoga is in fact a science which is probably more than 5000 years old; the first references to Yoga came from the Vedas; subsequently other texts expanded on the purpose and practices of Yoga.

What is Yoga Therapy and how does it differ from Yoga?

Yoga therapy like Yoga is a healing modality yet it differs from Yoga as it addresses specific medical conditions. Whilst Yoga is more generalized for the overall well-being of the human organism, Yoga Therapy is more individualized and specialized, catering for specific health issues. The practices are honed for the dis-ease itself, be they physical or psycho-emotional. The practices also work on the same level of body, mind, breath, conduct and intellect.

When did Yoga Therapy originate?

Yoga therapy was not documented or specifically labeled in the ancient texts it seems and is more of a recent arrival in the healing modalities.It appears that Yoga Therapy has its roots in India dating back to the 1920s; one of the pioneers of Yoga Therapy was Swami Kuvalayananda, who was a researcher and educator. The term yoga therapy was coined in 1970 by Doctor Bernard Auriol, a French psychiatrist and psychotherapist who specializes in states of consciousness and pioneered with ideas fusing classic psychoanalysis from the West with certain Eastern disciplines including Yoga.

Are there different types of Yoga Therapy?

There are basically two different types of Yoga therapy; the first being based on the diagnostic model of Ayurveda and the second being based on the diagnostic model of Modern Medicine. We at the Anadi School subscribe to Yoga Therapy based on the Ayurveda model as both Yoga and Ayurveda are sister sciences and have the same theories on the anatomy and physiology of the human organism. In other words, both Yoga and Ayurveda see the human organism in the same way and emphasize the prana factor. Prana is the life force in the body and if it gets blocked in the body, dis-ease results. Wherever prana does not flow in the human organism, that part of the body becomes stagnant and liable to dis-ease.

Both Yoga and Ayurveda place great emphasis on the mind and its connection with disease. In fact, in the first verse of one of the Ayurveda classical texts, AshtangaHrdayam begins with ‘ragadirogan...’ which means that most diseases come from attachment. It is therefore implied that the mind patterns have to be changed for deep healing for without this the root of the dis-ease cannot be tackled. ‘Raga’ literally means attachment and where there is attachment, there is expectation which when unfulfilled leads to anger, hate, jealousy and other negative emotions. Yoga aims to place the mind in a state of ‘non reaction’ so that it remains stable regardless of the mind’s internal state and challenging external situations. In the words of the Bible, we could look at it as ‘be in the world but not of the world’. Furthermore, in the words of the ancient and most elaborate text on Yoga the Patanjali Yoga Sutra, the purpose of Yoga is considered to be ‘chittavrittinirodhaha’ as well as ‘sukhamsthiramasanam’; the former means the cessation of thoughts and the latter means to be in a comfortable stable position. The goal of Yoga is ultimately samadhi which literally means balanced intellect. These verses would suggest a stable mind and body, unaffected by inner and outer circumstances. We can see from these verses that the mind has a powerful effect on health by creating positive and adverse health conditions. Controlling the mind through practices given in Yoga and Ayurveda would be a big step in healing the human organism

Modern science too is moving in this direction and has a branch of medicine connected to the mind (known as psychosomatic diseases) which has gained more momentum in the last few decades. These psychosomatic diseases are considered to be diseases connected to the mind; often no diagnostic test can reveal the disease hence they are labeled as psycho-somatic. It is a well-known fact that getting angry can lead to heat in the body, for example, which could result in acidity, high blood pressure, contamination of blood leading to skin diseases, inflammation and so on. Anger can also create an imbalance in the nervous system and can lead to mind and emotional disorders. These are just a few obvious examples so that we understand the mind-body connection.

We at the Anadischool would therefore say that there are 2 types of Yoga therapy; one based on Ayurveda and one based on allopathy. The former is believed to be more effective as it is individualized and prescribed according to an individual’s specific mind-body complex using ancient diagnostic practices, The latter is not so individualized as it relies on an allopathic disease diagnosis which could end up in e.g., a case of diabetes being treated in the same way for all diagnosed with this condition. This is a one shoe fits all approach. However, having said that, we cannot say that allopathic based yoga therapy is not fruitful as modern research has shown it to be in many cases. We would doubt, however, whether the root of the disease has been addressed and therefore whether the treatment offers only a symptomatic cure rather than a longer-term cure as Ayurveda based Yoga Therapy could do.

Recognition and Research of Yoga Therapy

There has been much modern research in this field across the globe. Yoga therapy is now recognized as a valid treatment modality but not a stand-alone one. It is recognized as an adjunct practice along with other complementary/ alternative and allopathic treatments. The UK is one western country amongst others that has truly recognized the validity of Yoga therapy and has integrated it into their government based National Health Service. To qualify as a Yoga therapist in the UK one would have to go through a stringent training course designed on the basis of modern medicine and only then could one hold a position of Yoga therapist.

Who is eligible to offer Yoga therapy?

This varies from country to country. To perform Yoga Therapy, you will need to find out from your country the qualifications required; without a recognized qualification you cannot hold yourself out as a Yoga therapist legally. Furthermore, you would not get liability insurance should something adverse happen to your patient during the course of your treatment. There is no international body for the accreditation of Yoga therapists and each country has its own standards. Without accreditation, the Yoga Therapist is not permitted to practice and will receive no liability insurance. If you are seeking to receive Yoga Therapy, make sure your therapist is accredited and if you are seeking to learn Yoga Therapy, ensure that you can get accreditation which entitles you to insurance

How does Yoga Therapy work?

As explained above the patient’s condition is assessed according to the Ayurveda or Allopathic model of anatomy and physiology. Usually, a Doctor of Ayurveda or Modern Medicine would do this assessment and in consultation with the Yoga Therapist, a series of Yoga related practices would be prescribed over a course of time; the practices would change from time to time depending on the results seen in the patient. The type of practices would be on the level of body, mind and breath.

What can Yoga Therapy Treat?

Yoga therapy can treat a variety of conditions including the following:

These are to name a few, however the range of diseases that can be treated and healed by Yoga Therapy are numerous. Some diseases can be healed with Yoga Therapy as a stand-alone treatment and others when complemented by other systems of medicine including Ayurveda and Modern Medicine. Even if a disease cannot be healed completely, Yoga Therapy can help relieve the symptoms of the disease making the patient more at ease.

Know all about Yoga Teacher Training

Ask us to know all about yoga course details, our team will get back to you with all relevant information regarding yoga teacher training course.

Get in Touch with Us