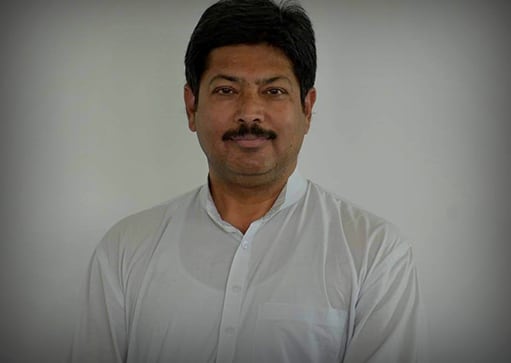 Philosophy and Meditation
Nalin Sharma was born into a traditional Brahmin family and grew up in a very spiritual environment. After completing his postgraduate degree in Electronics and Computers, he worked as a design engineer in elite organizations in the USA, such as Microsoft. He took early retirement from his professional life and settled in Rishikesh, India.

RYT 500 Asana & Spiritual Mentor
Arvind Gusain, the co-founder of Anadi Yoga Centre, was born in Rishikesh, India. He started practicing yoga at the age of twenty-one. Arvind received a Masters Degree in Yoga Science from Sanskrit Gurukul Vishvidyalaya, in Haridwar, India. He has completed 500 hours of teacher training, studied with various great Indian teachers and attended an intensive Ashtanga Vinyasa course with Mathew Sweeney, a prestigious teacher from Mysore, India.

In addition to his time spent teaching in Rishikesh, he has also spread his love and knowledge of yoga in Thailand! He enjoys practicing and teaching Ashtanga Vinyasa, focusing on correct alignment of the body and the mind. 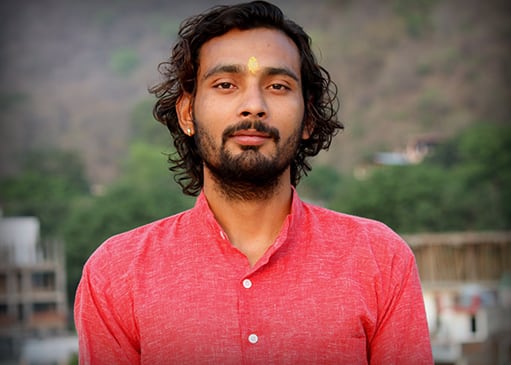 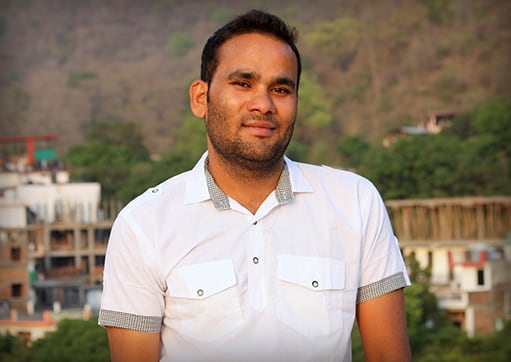 Eryt 500 Teacher & Spiritual Mentor
Jeet, the co-founder of Anadi Yoga Centre, was born in Rishikesh. He has been practicing yoga from a very young age. Chanting, creating offerings and connecting with the spirits and nature has been a part of his daily life since childhood. He was introduced to yoga and inspired to begin his yoga teaching path, by his brother, Narendra.

He completed a 500 hours teacher training course with Rishikesh Yog Peeth and became certified with Yoga Alliance in 2013. He completed an intensive Iyengar training course with Usha Devi, as well as earning a certificate in International Marma Science and Therapy to enhance his knowledge of healing. His classes take his students deeper into their practice with a focus on alignment.

He has also been a dedicated staff member of Rishikesh Yog Peeth, teaching 200, 300 & 500 hours courses. He believes that through the steady practice of yoga with correct alignment, we can fully understand our bodies and can live to our fullest potential. To him, yoga is the relationship that is built between the body, mind, and breath. He hopes to help others develop body awareness and a balance between flexibility and strength, as well as a connection with their most honest self through consistent practice.

E-RYT 500 Asana, Methodology, Pranayama & Mantras
Narendra, co-founder of Anadi Yoga Centre, is a 500 hours E-RYT with Yoga Alliance, was born and raised in Rishikesh. Narendra knew his destiny in life was to devote himself to the practice of Yoga, meditation and spirituality from the young age of sixteen. Narendra attained his Master’s degree in Yoga Science from Sanskrit Vishvidyalaya University in Haridwar, India as well as his Doctorate in Naturopathy/Natural Medicine from the Indian Board of Alternative Medicines.

Narendra further advanced his studies by developing his knowledge of Ashtanga Yoga in its birthplace of Mysore, India where he lived and trained with some of the worlds best Ashtanga Masters as well as completing and attaining his International Marma Science and Therapy Certification and Reiki Master Certification to advance his healing practices. 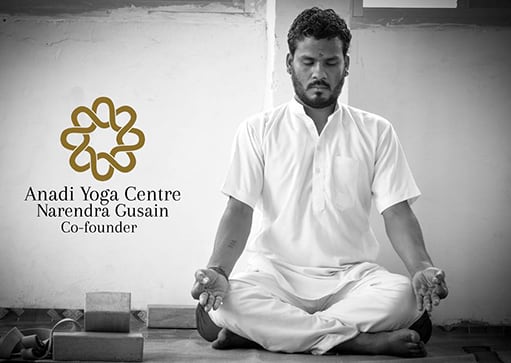 Narendra trained in Vedic Astrology under Swami Maheshananda. He also studied Ayurveda and Energy healing under his Guru Sri Swami Narayana Dutt Nagar Ji and is an initiate of the Udaseen lineage. Narendra is passionate about Vedanta philosophy (India’s ancient Hindu philosophy) and Tantra Meditation which led him to five months long study under the great Swami Nalin Sharma.

Narendra is very respected by all who meet him and is well known for his teachings, his passion for what he does and his love of sharing his knowledge with others. He is loved by his students for his dynamic teaching style and precise adjustments that add new dimensions to their asana practice. He takes all of the disciplines he has studied and uses whatever method he believes will best reach his students to help them on their path. Narendra is a true believer in the power of yogic practice and meditation but always likes to remind his students that “The power is not in Yoga itself, the true power is already within you. Yoga is just the key to unlocking this treasure.”

Anatomy & Philosophy
Anant jethuri is young and dynamic teacher who born on the bank of holy river Ganga since the childhood he has seen all the spiritual master around which brought him close to this holistic spiritual science he was always curious about all these spiritual aspects of yoga, he always want to help people to be healthy and always motivate them for healthy wealthy lifestyle by the knowledge which he got on the university about health and anatomy and physiology he has done masters in biology and taught it for different schools in Rishikesh than after that he decides to joint yoga school and thought to give the world the different approach about yoga sciences with Morden sciences. He enrolled himself for 500 hrs. yoga teacher training and then started learning about the connection of yoga with anatomy and physiology. 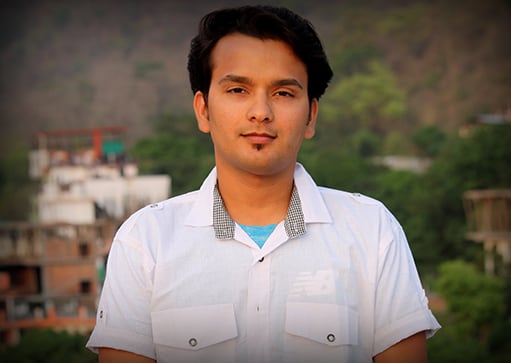 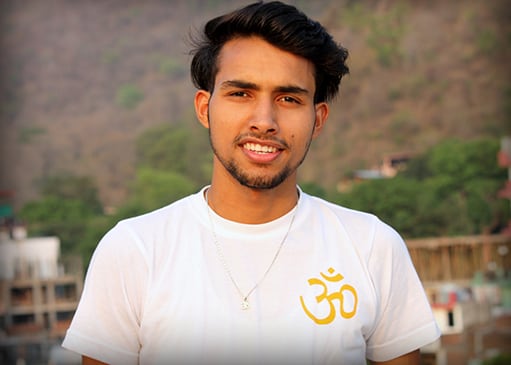 RYT 200 (Asana & Mantra Teacher)
Born and raised in Rishikesh, our young teacher Abhi is a very committed teacher who gracefully shares the wealth of his knowledge. Under his watchful eye, students feel well-guided and enjoy his very dynamic and quite challenging asana classes. Since completing his 500 HRS at the age of 18, Abhi has been very committed and mindful in his practice, and has consistently furthered his practice with the help and guidance of his masters.

He completed his Bachelor of Arts and will soon start his Master's in Yoga Science. He often shares with his students the importance of self-practice, and how much you can learn about yourself and improve through your self-practice, instilling a sense in them that you can accomplish anything you want with effort and discipline.

Pranayama
Roopam Pundir is a young and dynamic yoga teacher who specializes in pranayama. Her passion for yoga began at a young age, and she has spent many years studying under great masters learning all aspects of yoga but specifically focusing on the health and wellness benefits of pranayama and meditation. She is also currently furthering her studies pursuing her master degree in Yoga Science from Uttarakhand Sanskrit University in Haridwar, India. Roopam is a dedicated teacher with ample experience and is loved by all of her students. She pays particular attention to the needs of every student throughout each class and gives an in-depth and clear understanding of different breathing techniques and their benefits. Roopam leaves all of her students with a new and deep knowledge and understanding of pranayama that can benefit themselves and others for a lifetime. 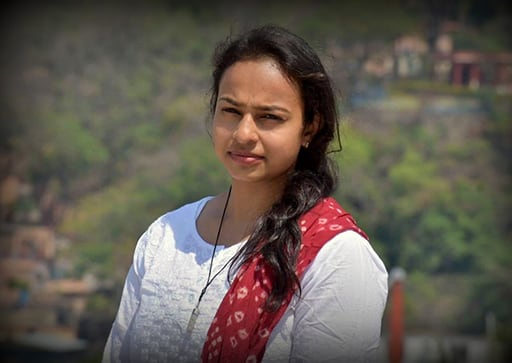 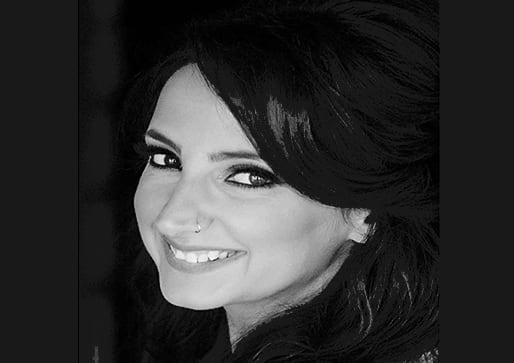 E-RYT 500 Guest Faculty
Amanda is a professional dancer from Canada turned Yogini after she discovered her second calling in life, to share the gift of Yoga with others. After completing her full Pilates and Functional Anatomy Certification, Amanda traveled the world as a professional dancer and Yoga instructor for 7 years. She lived in Rishikesh, India for a life-changing five months. During this time she studied Yoga and philosophy under various Yoga Masters obtaining her E-RYT 500 Hour Certification with Yoga Alliance. Amanda focuses on body alignment, functionality and awareness to build a strong foundation in Asana practice and specializes in Vinyasa and Yin Yoga styles. She loves to laugh and have fun and believes that each time you step on your mat should be a time of total love and devotion you give to yourself. Though Amanda still travels the world teaching, you will never find her away from India for too long. She now proudly calls Rishikesh her second home.